Matt Dyson Co-founder and CEO of Rockit knows what successful crowdfunding takes. He and his team beat their crowdfunding target and overfunded to raise £253,000 in May 2018. It’s been quite a ride. Rockit only launched in October 2017 and to beat their investment target within eight months of trading is testament to the efforts of the team.

Hatty Fawcett of Crowdfunding Accelerator asked Matt what he thinks made the difference to Rockit’s successful crowdfunding campaign. 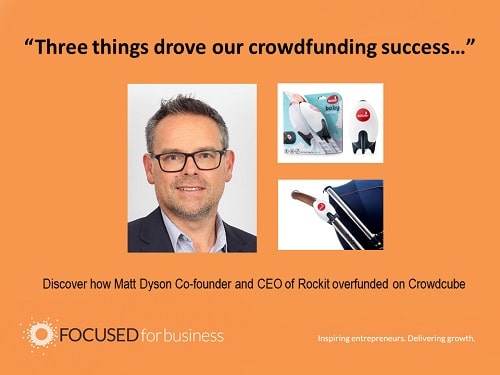 Hatty: What attracted you to crowdfunding for your investment raise?

“Crowdfunding is a fantastic opportunity to increase exposure at the same time as raising investment.”

Matt: Ever since we launched Rockit, the portable baby rocker, in October 2017, its been creating a real buzz. As we started thinking about raising investment, we had already built up quite a following amongst parents both in the UK and abroad. Crowdfunding seemed a perfect match as we could access a large pool of potential investors whilst simultaneously building a group of Rockit brand advocates. It was a fantastic opportunity to increase our exposure at the same time as raising the investment.

Hatty: Many early-stage businesses with a strong product start with reward-based crowdfunding, why did you choose to do equity crowdfunding?

“Our investors will benefit from the success of the business as a whole, not just a single product.”

Matt: We had already launched Rockit and it was gaining traction in the market. The team were working on a range of follow-up products to solve various child sleep issues. We chose to focus on equity crowdfunding to raise capital to bring these new products to market as quickly as possible, but also to increase marketing spend both in the UK and overseas. Our investors will benefit from the success of the business as a whole, not just a single product.

Hatty: What do you attribute your successful crowdfunding campaign to?

Matt: The appeal of our product has to be a factor. Rockit itself certainly caught the eye of investors as there is nothing quite like it on the market.

Thorough preparation for the campaign was another key attribute.

“We spent several months planning and preparing the video, pitch deck and financial forecasts. Several serial investors commented on the attention to detail and the fact that we supported our assumptions with detailed explanations.”

Hatty: A lot of crowdfunding platforms won’t accept you on to their platform until you have secured some of your investment target. Did you have a “lead investor”?

“We managed to reach 40% of our funding target prior to going live…that pump-priming meant the campaign got off to a flying start.”

Matt: I agree that securing some of your investment prior to putting your campaign live is important for successful crowdfunding. We managed to reach 40% of our funding target prior to going live on Crowdcube so we had primed the pump but we didn’t have a single lead investor. Instead we were backed by a number of smaller investors who had followed our progress over the previous months. This, coupled with the fact that we still had some SEIS allowance for the early investors, meant that the campaign got off to a flying start.

Hatty: What promotional activities did you undertake to bring “the crowd” – those you didn’t know prior to crowdfunding – to your pitch?

“Our PR drive was probably the most effective way of engaging with the crowd as it snowballed organically and drove lots of potential investors to our campaign page.”

Matt: We promoted the raise on all our social media platforms, posting regular updates about the campaign but also about key successes within the business generally.

Whilst we were live we signed several distribution deals including one in the US. We also won several design and consumer awards. These successes were very timely and we certainly found it encouraged investment during the campaign.

We were also lucky to be featured on ITV’s ‘This Morning’ and that generated additional press interest. This PR drive was probably the most effective way of engaging with the crowd as it snowballed organically and drove lots of potential investors to our campaign page.

“Start planning 3 or 4 months prior to the launch of a campaign. That may seem like a long lead time but preparation is key!”

Matt: This gives you time to identify all the potential investors in your various networks and start conversations with them.

Another tip is to get feedback on all your campaign materials – video, deck and pitch page before finalising them. This is something we did repeatedly with both the Crowdcube team but also via feedback from experienced investors within our personal networks.

Hatty: Many founders who successfully crowdfund tell me it is very time-consuming. What do you recommend for maintaining your motivation and commitment when crowdfunding?

Matt: It’s certainly challenging running a crowdfunding campaign whilst also maintaining the day to day running of the business! Our days were long and we often found ourselves emailing responses to potential investors late into the night.

“There were times when the investments were slower to arrive than we would have liked and it was really useful having a plan to promote the campaign using different channels to increase engagement on these quieter days.”

Hatty: Have there been any surprising outcomes from your successful crowdfunding?

Matt: Yes! Crowdfunding has certainly raised the profile of our business, not just in the UK but overseas too. We are following up some leads from potential international distributors who became aware of Rockit through the Crowdcube campaign. We have also had some investors offer expertise and advice on a voluntary basis as we move forward. All in all it’s been a very rewarding experience.

**** Free, live and interactive webinar “How to succeed at crowdfunding” packed full of practical crowdfunding advice, insider tips and resources that support your crowdfunding campaign. RESERVE YOUR FREE PLACE ****